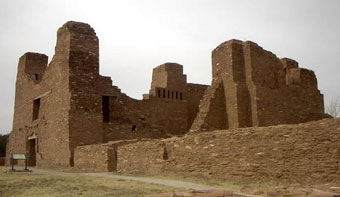 The history of Mountainair and the surrounding area merges with its present-day description, offering a Gateway to Ancient Cities.

Hundreds of years ago Abó had an abundance of water, creating a sustainable farming community that historians estimate may have reached 20,000 native inhabitants. A Pueblo (Tompiro) petrogylph at Abó, dated from the 1400’s depicts Tawa, the Sun-Father, one of the most revered deities of the Pueblo Indians and a key element for a bountiful harvest. Abó is positioned on a major east-west trade route the Abó Pass, a shallow gap that divides the Manzano and Los Piños Mountains. The community of Abó was still thriving when Spanish explorers came upon it in 1561. Abó was the head of one of the largest missionary operations in New Mexico, known today as the part of the National Monument Salinas Pueblo Missions. The three sites that comprise these ruins—Abó, Quarai and Gran Quivira—attract historians, archeologists, and visitors to Mountainair from all over the world.

Among the intriguing aspects of Mountainair are residents who can still tell the story of when their Grandparents called an area within the town, Monte Alto. However difficult it may be to locate historic documents verifying these tales, one can only imagine a small village of settlers, unaware of the attention they were about to receive.

The attention arrived with the railroad and the founding of Mountainair by John Corbett, Colonel E.C. Manning, and former U.S. Governor E. S. Stover in the summer of 1903. It was the first incorporated town in the area–before Torrance was a county and before New Mexico officially became a state. Strategically sited for the railroad at the summit of Abó Pass and named for its cool fresh mountain breezes, passengers first rolled into Mountainair in 1907 and continued to travel through during the 1960’s. This alternate route, now primarily used for freight, known as the Belen cut-off, is part of the transcontinental tracks. It was built in some measure to alleviate the extreme grades and delays over Raton and the Glorietta passes. The depot, currently owned by BNSF, is listed on the National Register of Historic Places.

In the early 1900’s, with rain in abundance, farming again played an important role in the area’s history, fostering a boom in the economy and increasing the population to nearly 5,000. This entitled Mountainair to become the “The Pinto Bean Capital of the World,” housing the nation’s largest bean processing center, with peak production reaching over 750 train carloads of beans in one season. Pinto beans, a sturdy crop, provided American soldiers their main rations through WWII. The beans were farmed on approximately 40,000 acres, using the rain as their principal source of water. In 1946 a 10-year drought began, leaving the land barren and forcing farmers to become ranchers or move to make a better living. With ranching now a mainstay in Torrance County and with a population today hovering at 2,000+ in Mountainair, there are likely more cattle than people living around the town.

In the mid 1980’s a resurgence of relocation to Mountainair took place and continues to this day, with numerous new or renovated homes and businesses in Mountainair and several innovative sub-divisions surrounding the town. This long and diverse history of Mountainair, in addition to the breathtaking views of the Chupadera Mesa and the Manzano Mountains, has a mystique that captures the imagination of writers, artists, photographers, and individuals searching for a unique and wondrous place. A little over an hour from Albuquerque, Mountainair, Gateway to Ancient Cities, offers an adventure into times past, enjoyment to its visitors, and endearment to its residents.